Engineering & Production Capabilities – An introduction to the ongoing video series

All in the fine print | ABG International Case Study

Partnering with PP Control & Automation is reaping dividends for ABG International, helping it achieve major manufacturing efficiencies and boosting its capacity to cope with rapid increases in sales.

“We have grown almost 50% over the last five years and this has been made possible thanks to the partnership we have established with PP Control & Automation.”

These telling words are from Phil Robson at ABG International, a manufacturer of innovative print finishing equipment for more than 60 years.

It’s not empty marketing rhetoric either from the experienced Operations Manager, but a genuine summary of a relationship that will soon be approaching its 9th anniversary and continues to go from strength to strength.

In short, it is a perfect example of how strategic outsourcing can help an already successful business become more efficient, improve lead times and, importantly, scale up quickly to take on new business without significantly increasing long-term overheads. 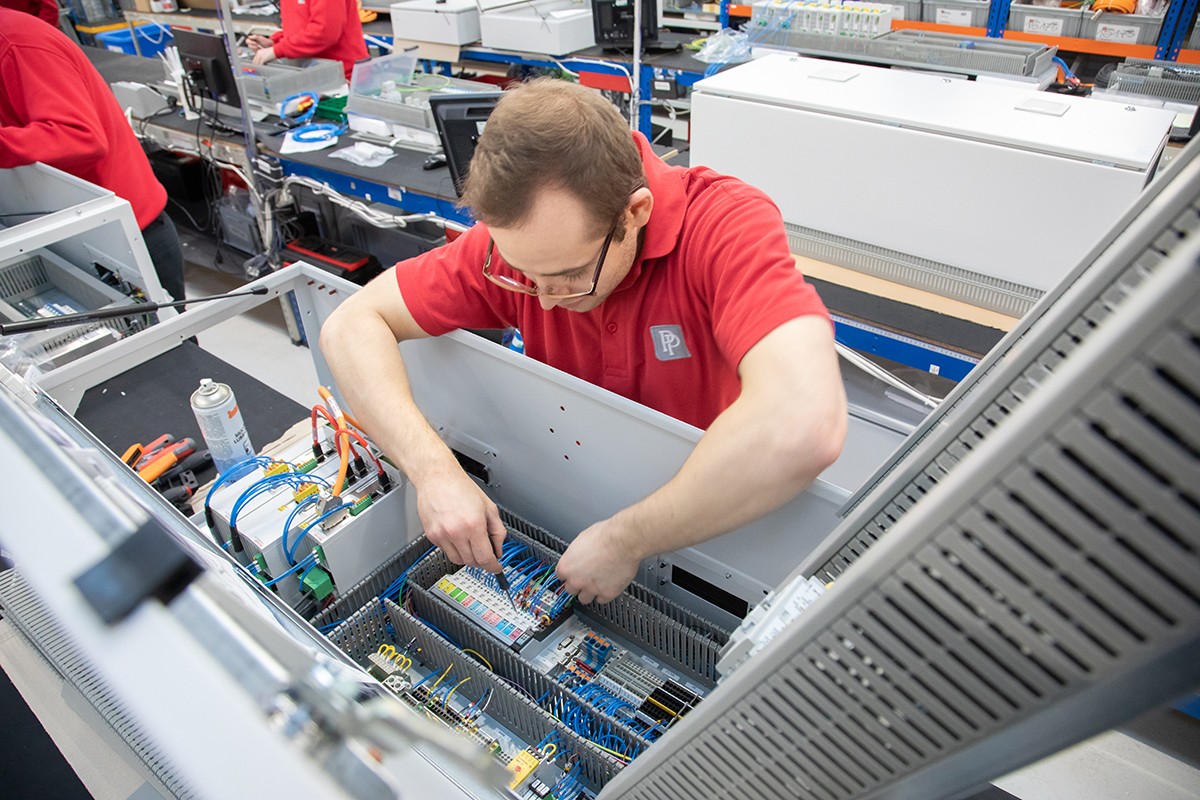 “The two businesses operate in very similar ways and, once we had seen PP Control & Automation’s capabilities at its world class facility in the West Midlands, we knew there were lots of synergies and a relationship to forge,” continued Phil.

“We originally engaged PP to produce the electrical back panels on our new Digicon 3 digital print finishing machine delivering them to our Bridlington factory where we would fit the cables and harnesses, a labour-intensive job that would usually take between 2 to 3 days.”

He continued: “It didn’t take long until engineers from both companies came up with a new way of assembly that involved developing a more standard enclosure system, which would allow the panel to be easily slid into the machine.”

Tony Hague, CEO of PP Control & Automation, picked up the story: “Once we had successfully came up with the enclosure design we could then start considering the cable harnessing and the interconnectivity around the machines.

“It quickly became apparent that a modular approach would be a lot more cost and time effective and we were given the task of designing a process that would see the modules assembled in the West Midlands.

“We could design the cable harnesses and ensure they were jigged to the optimum lengths so they could be plugged straight into the mating halves around the machine, whether distributing power or signals.

“Such a change meant that ABG could make the switch from hard wired sensors to M8 and M12 connectivity, something that allowed swift assembly and test. Using distributed I/O technology vastly reduced wiring time and paved the way for a complete ‘plug & play’ assembly process around the machine.”

He continued: “As a spin-off project, we jointly came up with a Power Distribution Unit that mounts at the front of the machine and distributes the power around the machine to each of the modules.

“Working with the modular concept, means engineers at PP can look at the specific machine make up and configuration and immediately calculate both the circuit protection requirements and the cable lengths, based on standard routings – providing a quick installation for the team.”

ABG and PP engineers took just six months to redesign the controls architecture into the new modular format. This has given the end customer a huge amount of flexibility when specifying the exact machine requirements they need, whilst ensuring ABG is not having to redesign constantly, rather selecting and configuring modules in a manner that provides a bespoke solution to the user.

In fact, the East Yorkshire business can now offer over 20 different configurations on its Digicon 3 platform.

Full interconnectivity solutions being designed and introduced and creating a ‘plug and play’ scenario not only speeds up initial build, but also supports very efficient machine commissioning in the field – allowing machines to be up and running more quickly on site.

“We always wanted to move towards this scenario and our strong partnership with PP meant we got there quicker than we initially anticipated, using positive lessons gained from different sectors along the way.” continued Garth Williams, Software Manager at ABG International. 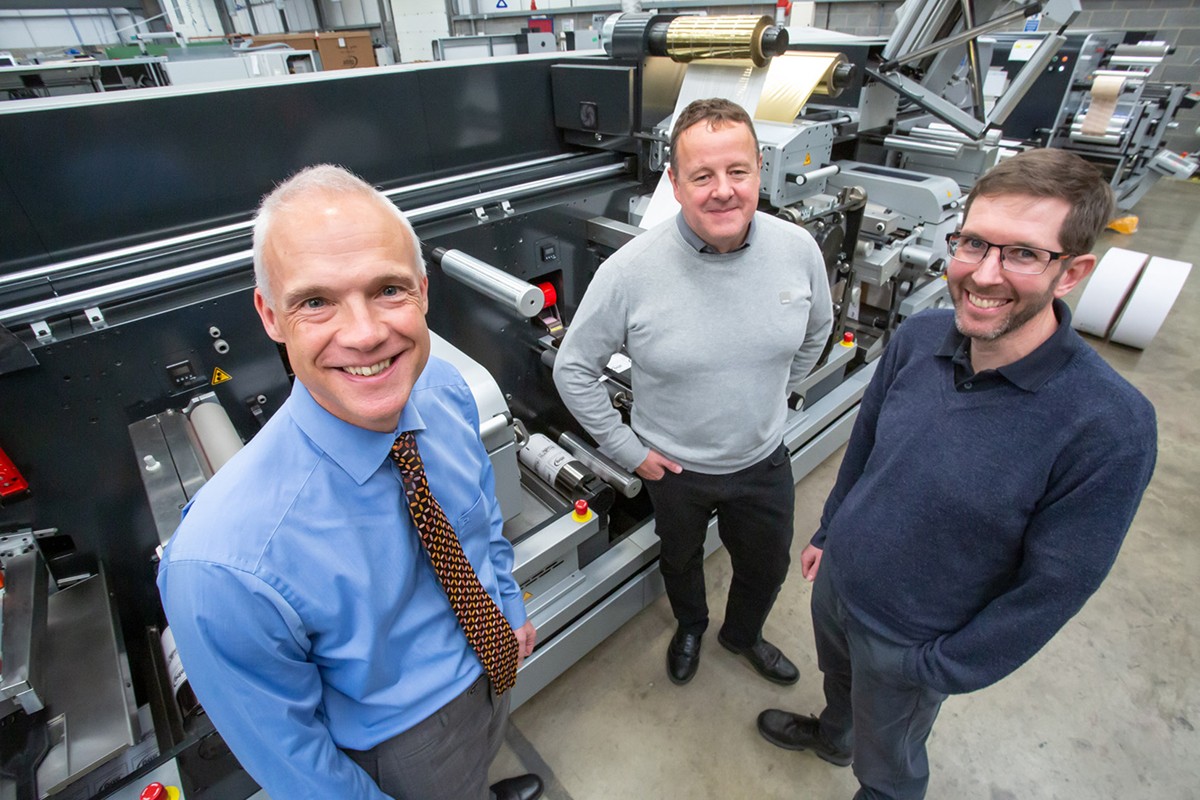 “Both companies invested a lot of time at the start of the working relationship and this ensured we both fully understood each other’s business and where PP could add value.

“The ‘plug and play’ approach is 60% faster than the previous assembly process and has eliminated 700 days of production each year, which can now be re-allocated to other areas of manufacturing and thus increasing our machine build capacity.”

ABG International, which employs nearly 350 people across three manufacturing plants in the UK and Germany, is the world leader in digital finishing equipment that produces high quality labels and packaging for 2500 customers across the world.

It worked with PP Control & Automation to manufacture up to 250 machines in 2018, with plans in place to increase this to 300 as more firms adopt the many benefits of digital printing.

“Digital print is taking over from conventional printing, so we anticipate the market to expand rapidly over the next decade,” pointed out Phil.

“Thanks to our commitment to outsourcing, we are now more efficient and have cut production and sales lead times significantly. Importantly, PP has also given us the additional capacity that allows us to go after new business safe in the knowledge we can quickly ramp up production to cope with it.”

PP Control & Automation customer case studies will be updated in a new dedicated area of the website, with access to full press releases, downloadable documents and an image gallery.

Resilience: a book about breaking the cycle of supply chain disruption | Free download

This book details not just the supply chain disruption at play, but also the opportunity to break the cycle and take back control.

There is no magic ticket out of the supply chain mess, but it is a time when businesses with the ability to think outside the box can find opportunities, stand …

50 vacancies available at MAN Group due to reshoring contracts

The MAN Group is embarking on a major recruitment drive after a string of reshoring wins and new breakthroughs in electrification technology.

The PP+ ecosystem responds at speed to the wishes of KPM

Within weeks, KPM is already reaping the rewards of the PP+ ecosystem of specialist Growth Module Partners.

Machinery builders and companies looking to bring new technologies to market are set to benefit from a new resource centre being launched by PP Control & Automation.

Scott Ward can reflects on close to 10 years of involvement in the continuous improvement department and selects five of his personal favourite moments.

After two years of global supply-chain disruption, and with dark clouds on the horizon, manufacturers around Britain’s second city of Birmingham say they are inundated with orders, helped by new …

Three schools from the Black Country and Warwickshire have been crowned as the main winners at one of the biggest independent manufacturing-education events in the UK.

BREAK THE CYCLE OF DISRUPTION

A series of published content from leading voices at PP Control & Automation and the UK manufacturing community, detailing supply chain disruption and the opportunity to break the cycle and take back control.

GRAB ONE!
No Thanks